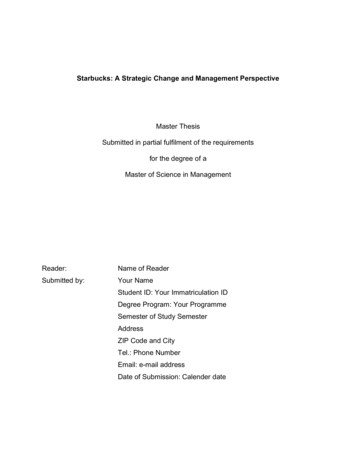 [Surname] 5IntroductionStarbucks Coffee Company’s success in the coffee business echoedresoundingly across the globe. The company was able to attract many customersdespite its overpriced coffee. The coffee-chain managed to draw the attention ofinvestors as well, as they saw in the Starbucks a profitable investment. Starbucks isbest known for its overpriced coffee and its excellent stores adorned with comfortablecouches and wonderful music. Starbucks marketed itself as the “Third Place” – a placewhere people can go aside from home and the workplace.The rapid growth of Starbucks has become a success story in the business worldand many people are bewildered by the company’s business strategy. Who could haveimagined a coffee outlet, selling overpriced coffee with fancy Italian names, canpersuade people to buy its products, and can make these people happy? Why arefinanciers lured into investing in the company? Why do investors put their money inStarbucks stocks? What’s in Starbucks that made it very successful in the coffeebusiness, selling its products at grossly high prices and yet been able to attract both thebuyers and the investors?For sure, the speedy success of Starbucks is a mystery in the industry of coffeebusiness. Starbucks’ rivals were not able to match the rapid growth of the company. In aspan of less than two decades, Starbucks was able to open tens of thousands of storesacross the globe. The value of its shares in the stock market also increased rapidly,evidence of its attractiveness to investors.However, the Starbucks “miracle” ceased to become a miracle. The fast-pacedgrowth that the company experienced had gone to a sudden stop. Starbucks posted a

[Surname] 650% decline in profit by the end of the 2008 fiscal year. The company’s stocks fellsharply to 9.44 at the end of 2008, from a high of 38.45 in mid-2007. Currently, thecoffee store is undertaking a major organizational retransformation. The company’schief executive officer, James Donald, was sacked and was replaced by its former CEOHoward Schultz.The company’s business model seemed to have lost its magic. The sharp declinein all figures stated above makes it an interesting topic to be analysed. The company’ssuccess, which took decades to be achieved, had ceased at such a fast rate. It tookonly a year to have the success story turn into a disaster.The company’s very own principle of aggressive expansionism seemed to be thereason for its decline. Its expansionism cannibalized the coffee chain’s luxurious nature.It lost its sense of exclusivity and high-end characteristics. The company hastransformed into a mass marketer selling overpriced coffee to a diverse marketsegments, wealthy or not. It appears that the Starbucks outlets seem to have becomelike fast-food chains. The previous posh experience offered by Starbucks has now beenchallenged by the other food chains such as McDonald’s and Dunkin Donuts. Hence asignificant portion of Starbucks’ customer base has been sliced and shifted to itscompetitors, who sell the same posh coffees at lower costs.The company’s SRI (socially responsible investments) funds seem to have notbeen delivering as well. The company has invested heavily in socially responsibleactivities such as environmental awareness campaigns, educational campaigns,acquisition of organic materials and donations to charitable and non-profit organizations.However, these investments appear to have not contributed to the company’s revenue

[Surname] 7and profit generations. The company seems to be losing money from theseinvestments.These circumstances make it interesting to study the Starbucks business modeland how the company adopts to these situations. Business analysts are very muchinterested at the situation that Starbucks is in now. The company’s sharp decline is acause of wonder since Starbucks has been previously seen as a formidable company.This makes the Starbucks a very interesting company to study. Why did Starbucks fellsharply? What happened with its business model? How did it occur? These are thequestions that need to be answered.To answer these issues, Starbucks’ business strategies and processes will beexamined and its value chain will be evaluated. The company’s primary and secondaryactivities and how these activities produce the company’s desired output will beanalysed to understand the company’s downfall. Based on this study, recommendationsfor a strategic change will be put forward in an attempt to enhance the company’sperformance and bring back the magic of the “Starbucks Experience.”Research MethodologyIn gathering information and data for this paper, the writer used various materialsregarding the company. These include the company’s website, online newspapers,magazines and online articles to collect preliminary data regarding the company’sbackground and financial status. The writer also gathered information on onlinemagazine articles and editorials that reflect the opinions and insights of business writersand editors, investors and analysts on the current situation of Starbucks. A major sourceof information was also taken from Taylor Clark’s (2007) book detailing Starbucks’

[Surname] 8history. Most of the quotations from Starbucks CEO Howard Schultz in this paper weretaken from Mr. Clark’s book as a reference to the chief executive’s thoughts andopinions.Academic books and journals written by known management, marketing andbusiness academicians and scholars were used as a guide in analysing the currentsituation of Starbucks. These academic materials were also utilized to provide the basicprinciples for the recommendations on the need for a strategic change in themanagement and business operations of Starbucks. An online survey was alsoconducted to support the findings and conclusions drawn in this paper. The survey wasconducted with a primary aim of getting the customer’s insights and perceptions towardStarbuck’s recent and past activities that include pricing strategy, Fair Trade activities,and other operational and management activities.Company Background and OverviewStarbucks first opened its store in 1971 at Pike Place Market in Seattle. It wasoriginally called Starbucks Coffee, Tea and Spices. The company first began itsoperations by providing coffee to restaurants and espresso bars. In the mid-1980s, thendirector of retail operations and marketing Howard Schultz introduced the idea of acoffeehouse to the company’s founders, an idea he derived from his visit in Milan, Italy.Schultz was captivated by the popularity of espresso bars and coffeehouses in Italy,which he then relayed to the company founders. Due to the success of this idea,Schultz later established Il Giornale, which later became the Starbucks CoffeeCompany when the founders of the original Starbucks Company sold it to him. Sincethen, the company experienced steady growth.

[Surname] 9In 1991, the upward growth of Starbucks was beginning to gain ground and bythe end of the decade, the company grew significantly. The 1990s was considered asthe company’s turning point toward becoming a giant company. However, it was at thestart of the millennium that the Starbucks “miracle” through the introduction of the“Starbucks Experience” really occurred. The coffee store grew in leaps and boundssince the year 2000. On the first half of this decade, the company aggressivelyexpanded in the domestic and international markets. Starbucks coffee shops began toopen by the hundreds every year in the United States. Starbucks outlets ha

The Starbucks “magic” was on a large extent spearheaded by the company’s core competencies and a strategy of focus and differentiation, which led to the company’s success. Foremost among this strategy is the company’s focus on a particular segment of the market. Starbucks has established personal relationship with its target customers. Its coffee shops are designed to have a cool, cozy feeling. TheFile Size: 327KBPage Count: 59

Chapter 1: WHAT IS CHANGE MANAGEMENT? What Is Change .

Moving from trying to managing change to practical Change .