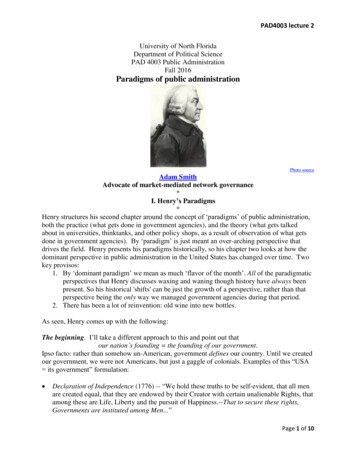 PAD4003 lecture 2University of North FloridaDepartment of Political SciencePAD 4003 Public AdministrationFall 2016Paradigms of public administrationPhoto sourceAdam SmithAdvocate of market-mediated network governance*I. Henry’s Paradigms*Henry structures his second chapter around the concept of ‘paradigms’ of public administration,both the practice (what gets done in government agencies), and the theory (what gets talkedabout in universities, thinktanks, and other policy shops, as a result of observation of what getsdone in government agencies). By ‘paradigm’ is just meant an over-arching perspective thatdrives the field. Henry presents his paradigms historically, so his chapter two looks at how thedominant perspective in public administration in the United States has changed over time. Twokey provisos:1. By ‘dominant paradigm’ we mean as much ‘flavor of the month’. All of the paradigmaticperspectives that Henry discusses waxing and waning though history have always beenpresent. So his historical 'shifts' can be just the growth of a perspective, rather than thatperspective being the only way we managed government agencies during that period.2. There has been a lot of reinvention: old wine into new bottles.As seen, Henry comes up with the following:The beginning. I’ll take a different approach to this and point out thatour nation’s founding the founding of our government.Ipso facto: rather than somehow un-American, government defines our country. Until we createdour government, we were not Americans, but just a gaggle of colonials. Examples of this “USA its government” formulation: Declaration of Independence (1776) -- “We hold these truths to be self-evident, that all menare created equal, that they are endowed by their Creator with certain unalienable Rights, thatamong these are Life, Liberty and the pursuit of Happiness.--That to secure these rights,Governments are instituted among Men.”Page 1 of 10

PAD4003 lecture 2 The Constitution (1789) – “We the people, in order to form a more perfect union, establishjustice, ensure domestic tranquility, provide for the common defense, promote the generalwelfare and provide the blessings of liberty to ourselves and our posterity, do ordain andestablish this constitution of the United States of America.”This is then repeated in Article I, Section 8. Yes, the US Constitution famously restricts thepower of government, but not before both creating it, and giving it considerable scope.It is also important to think in historical (and, for that matter, comparative) perspective aboutthis. As we saw in Table 1 of lecture 1, when you compare the US to other, actually existingsocieties, we are both relatively well governed, and lightly governed. Historically, thebureaucracy to which Wilson (and Goodsell) refers was a revolution, given what came before it:ineffective, unaccountable government. Another approach to it, this from Portugal (mytranslation):Relative to the organization form of public administration, and despite the justifiablecriticisms of the model and the functioning of bureaucracy, it is necessary to point out that atleast in the Portuguese case, one of the reasons for its limited public responsibility and for thelimitations in its efficiency and efficacy lie precisely in insufficient bureaucracy. Thebureaucratic model of organization, in the sense postulated by the classics of the theory oforganization – Weber, Fayol, Taylor and more recently, Mintzberg and Friedberg --, justlyunderline that, to limit the dysfunctionalities of an administration that is unprofessional andarbitrary, administration should conduct itself through [POSDCORB friendly reforms] One of the reasons for the evident dysfunctionalities results from the non-observance of theso-called bureaucratic model of organization. (Mozzicafreddo 2001, p. 14)The context is that Portugal, after its 1974 revolution, was entering the modern era after missingmost of 500 years of European history. Waking up, Rip Van Winkle-like and looking at a worldwith people complaining about bureaucracy, this country that missed the bureaucratic revolutioncould see that it needed more effective, and more accountable government. Or, as Henry puts itin the preface of our course text: in its original definition, bureaucracy in government was aboutgood government, that is “uncorrupted, democratic, and competent” (p. 4).The politics/administration dichotomy (1900-26). This is fundamental to the field of publicadministration, especially in terms of distinguishing it from political science. In short: Political science is about the election of political representatives (Congress, legislatures andcouncils) and government executives (President, Governor, Mayor), and the enactment oflegislation by those legislators, while. Public administration is about execution, and the career civil servants who implementpolicy. As we will see, public administrators are also often heavily involved in policyformulation. As well, due to the rampant corruption of the era, Wilson argued for a separation ofadministrators from citizens, to reduce the likelihood of private citizens capturing publicpolicy.Principles of public administration (1927-37). In the US, this has its roots at least in WoodrowWilson’s advocacy of “a science of administration which shall seek to straighten the paths ofPage 2 of 10

PAD4003 lecture 2government, to make its business less unbusinesslike; to strengthen and purify its organization,and to crown its duties with dutifulness” (1887, p. 201). Part of this movement, too, was to emulate what was seen as the superior managementmethods used in some business firms. So the idea was to use the scientific method todevelop better ways to run government agencies.The challenge (1938-50). In short, a revolt developed over the dogmatic over-emphasis of ‘thedichotomy’ (i.e. the separation of politics and administration), and of the development ofscientific principles of public administration. Put differently: Yes, administration and politics are different, but the two can’t be wholly separated. Just inpragmatic terms, you can’t administer without some appreciation of the politics in whichmanagement takes place, and the politician who can’t (or won’t) manage will accomplishlittle. Think of Mayor Brown Also: Yes, ‘businesslike’ administrative science is good, but business and government differ inimportant respects, not least the ‘market failures’ discussed in our first lecture.Public administration as political science (1950-70). Again: politics matters, it can’t beseparated completely from administration. Democracy matters, too!Public administration as management (1950-70). Henry presents this as a second, competingparadigm during this period. To over-simplify: The MPA sought to emulate the MBA, or this can be thought of as a resurgence of theWoodrow Wilson desire to make the business of government ‘less unbusinesslike’, andrenewed belief in developing ‘principles’ of administration. This also featured the ‘public management’ movement. Both halves were emphasized: thepublic (by the political scientists) and the management (by the MBA wannabes). In publicadministration scholarship, ‘public management’ and ‘public administration’ differ in nosignificant ways, the latter was largely an effort at rebranding.The forces of separatism (1965-70). Henry presents this as the development of a separateidentity among ‘public administrationists’, both academics and practitioners. In the US,systematic thinking about public administration had its origins in political science.Public administration as public administration (1970-present). Basically associated with theprevious approach: ‘public administrationists’ becoming more comfortable being ‘publicadministrationists’; rather than, say, political scientists, or business management specialists, orsociologists, who study public administration.Governance (1990-present). Something of a multi-dimensional approach to thinking of humangovernance, so that the links between public agencies and the rest of society are better appreciated, and there is a more conscious recognition that the public good can be provided by nonprofit,and especially for-profit organizations. This greater utilization of markets is generallyreferred to today as the New Public Management (even though it’s been around sinceWoodrow Wilson, and uses private markets rather than public management).Page 3 of 10

PAD4003 lecture 2II. An attempted rationalization of Henry’s paradigmsAll confusing enough, I’m sure. Note, again, all the reinvention in Henry’s paradigms:administrative science has had at least three phases of paradigmatic hegemony. Below I’ll offeran attempt at an integrated taxonomy, showing especially how Henry’s various paradigmsoverlap. This is illustrated in the table below. GC is me, NH is Nick Henry:GCNHTable 1Paradigms of public administration, me (GC) v. Nicholas Henry (NH)NetworkedCivicPre-modern ,governance, [ignored]beginning’ administrative emphases,new publicnew publicscience,publicmanagement, service,managementmanagementpoliticsPre-Modern Public Administration -- characterized by cronyism, patronage and lack of popularcontrol. Unfortunately, what Americans criticize in public bureaucracy has typically beentreated as a caricature and held up for abuse. This has especially been so from conservativepoliticians. Margaret Thatcher, on the eve of the Conservative Party’s 1979 general electionvictory, warned of “the slither and slide to the socialist state” (Thatcher 1979), while former USPresident Ronald Reagan argued in his 1981 inaugural address: “In this present crisis,government is not the solution to our problem; government is the problem”1 (Reagan 1981). It isalso worth noting that this broader anti-government perspective is not restricted to the politicalright. Long-time leftist political activist Ralph Nader echoed Reagan’s anti-government dirge ina 2004 interview shortly after announcing his candidacy for President of the United States:"Washington is now a corporate-occupied territory. There's a "For Sale" sign on almostevery door of agencies and departments where these corporations dominate and they puttheir appointments in high office." (Nader 2004)Yet despite these criticisms, 'bureaucracy' was (and remains!) a reformist, even radical reformistmovement. The common failure to recognize this may be because many American citizens, andeven contemporary American scholars of government, have little experience of administration inthe absence of modern bureaucracy. Rather than over large and ineffective, the US is one of thebest governed societies in the history of our species. I’ll repeat that for emphasis:Rather than over large and ineffective, the US is one of thebest governed societies in the history of our species.1For the record, especially regarding the claims of Thatcher and Reagan: Fraser/Cato economic freedom ratingsshow a relatively large British state in 1980 (the year after Thatcher’s assumption of office as Prime Minister), butlittle evidence of the dictatorial economic coercion implied in the statement above: the UK was the 12 th leastregulated economy in the world (out of 153 analysed), ranked fifth in freedom of international trade, ranked arespectable 19th in the integrity of its legal structure and security of property rights, and ranked 17 th in terms ofeconomic freedom overall. The impeccably conservative Cato/Fraser index similarly ranked the US as the thirdmost free economy on the eve of the Reagan administration.Page 4 of 10

PAD4003 lecture 2Bureaucracy (the 'how' of administration) -- Also referred to as administrative science, this hasbeen around at least since Wilson’s call for “a science of administration which shall seek tostraighten the paths of government, to make its business less unbusinesslike” (1887, p.201). Chevallier similarly points to earlier roots of administrative science (1986, p. 12-19),specifically with reference to the long historical battle against the undemocratic cronyism andpatronage of ‘pre-modern’ administration.Henry describes this science of administration as having received a substantial boost in the 1920sand 1930s, with Willoughby’s Principles of Administration, followed a decade later by Gulickand Urwick’s POSDCORB (Henry 2007, p. 28-30). The influence of the more recent ‘publicmanagement’ movement (Henry 2007, p. 34-5) on the discipline of public administration hasseen an understandingof the science andTable 2technique of publicSome pragmatic, good government Legalstrengthened. Evenperceptionsfreedomeffectivenesssystemmuch of the ‘new’G7 public managementUS7.117.867.50movement, with itsAustralia8.718.938.31emphasis on improvedCanada8.919.298.28management techniques France6.817.147.31(Hood 1991, p. 4-5;Germany7.917.868.17Bresser Pereira 1998, p. Italy3.91.56.795.6718-20, 52-58), isJapan7.81.58.217.49consistent with theSweden9.219.648.48traditions of thisUK7.617.868.11venerable, and stillprominent (CandlerBRICs2008) administrativeBrazil3.727.505.25science paradigm.China3.56.55.006.38India3.32.58.575.93By way of some context Russia2.15.53.215.73on governance in theUS, see Table 2, atLaggardsright. As you can see,Pakistan2.34.55.714.04the US does relativelyNigeria2.44.03.214.20well, scoring fairly high Vietnam2.76.04.296.01in terms of the honestyVenezuela2.05.03.932.91and effectiveness of its2Sources: Transparency International’s 2010 Corruption Perceptions Index. Higher scores indicate less perceptionof corruption. Freedom House’s 2011 Freedom in the World Report. Freedom House rates countries in terms ofcivil and political freedom, on a 1 (free) to 7 (unfree) scale. The number presented here is the average of these twoscores. The Government Effectiveness indicator comes from The Economist Intelligence Unit’s Democrac

ReSUme FoR inTernship or co-op WiThouT relATed . - UNF

The Digital Transformation of Public Administration