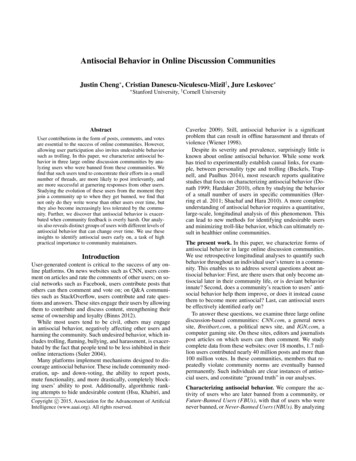 Antisocial Behavior in Online Discussion CommunitiesJustin Cheng , Cristian Danescu-Niculescu-Mizil† , Jure Leskovec Stanford University, † Cornell UniversityAbstractUser contributions in the form of posts, comments, and votesare essential to the success of online communities. However,allowing user participation also invites undesirable behaviorsuch as trolling. In this paper, we characterize antisocial behavior in three large online discussion communities by analyzing users who were banned from these communities. Wefind that such users tend to concentrate their efforts in a smallnumber of threads, are more likely to post irrelevantly, andare more successful at garnering responses from other users.Studying the evolution of these users from the moment theyjoin a community up to when they get banned, we find thatnot only do they write worse than other users over time, butthey also become increasingly less tolerated by the community. Further, we discover that antisocial behavior is exacerbated when community feedback is overly harsh. Our analysis also reveals distinct groups of users with different levels ofantisocial behavior that can change over time. We use theseinsights to identify antisocial users early on, a task of highpractical importance to community maintainers.IntroductionUser-generated content is critical to the success of any online platforms. On news websites such as CNN, users comment on articles and rate the comments of other users; on social networks such as Facebook, users contribute posts thatothers can then comment and vote on; on Q&A communities such as StackOverflow, users contribute and rate questions and answers. These sites engage their users by allowingthem to contribute and discuss content, strengthening theirsense of ownership and loyalty (Binns 2012).While most users tend to be civil, others may engagein antisocial behavior, negatively affecting other users andharming the community. Such undesired behavior, which includes trolling, flaming, bullying, and harassment, is exacerbated by the fact that people tend to be less inhibited in theironline interactions (Suler 2004).Many platforms implement mechanisms designed to discourage antisocial behavior. These include community moderation, up- and down-voting, the ability to report posts,mute functionality, and more drastically, completely blocking users’ ability to post. Additionally, algorithmic ranking attempts to hide undesirable content (Hsu, Khabiri, andCopyright c 2015, Association for the Advancement of ArtificialIntelligence (www.aaai.org). All rights reserved.Caverlee 2009). Still, antisocial behavior is a significantproblem that can result in offline harassment and threats ofviolence (Wiener 1998).Despite its severity and prevalence, surprisingly little isknown about online antisocial behavior. While some workhas tried to experimentally establish causal links, for example, between personality type and trolling (Buckels, Trapnell, and Paulhus 2014), most research reports qualitativestudies that focus on characterizing antisocial behavior (Donath 1999; Hardaker 2010), often by studying the behaviorof a small number of users in specific communities (Herring et al. 2011; Shachaf and Hara 2010). A more completeunderstanding of antisocial behavior requires a quantitative,large-scale, longitudinal analysis of this phenomenon. Thiscan lead to new methods for identifying undesirable usersand minimizing troll-like behavior, which can ultimately result in healthier online communities.The present work. In this paper, we characterize forms ofantisocial behavior in large online discussion communities.We use retrospective longitudinal analyses to quantify suchbehavior throughout an individual user’s tenure in a community. This enables us to address several questions about antisocial behavior: First, are there users that only become antisocial later in their community life, or is deviant behaviorinnate? Second, does a community’s reaction to users’ antisocial behavior help them improve, or does it instead causethem to become more antisocial? Last, can antisocial usersbe effectively identified early on?To answer these questions, we examine three large onlinediscussion-based communities: CNN.com, a general newssite, Breitbart.com, a political news site, and IGN.com, acomputer gaming site. On these sites, editors and journalistspost articles on which users can then comment. We studycomplete data from these websites: over 18 months, 1.7 million users contributed nearly 40 million posts and more than100 million votes. In these communities, members that repeatedly violate community norms are eventually bannedpermanently. Such individuals are clear instances of antisocial users, and constitute “ground truth” in our analyses.Characterizing antisocial behavior. We compare the activity of users who are later banned from a community, orFuture-Banned Users (FBUs), with that of users who werenever banned, or Never-Banned Users (NBUs). By analyzing

the language of their posts, we find significant differencesbetween these two groups. For example, FBUs tend to writeless similarly to other users, and their posts are harder to understand according to standard readability metrics. They arealso more likely to use language that may stir further conflict(e.g., they use less positive words and use more profanity).FBUs also differ in how they engage in discussions: theirposts tend to be concentrated in individual threads ratherthan spread out across several. They receive more repliesthan average users, suggesting that they might be successfulin luring others into fruitless, time-consuming discussions.Longitudinal analysis. We find that the behavior of an FBUworsens over their active tenure in a community. Througha combination of crowdsourcing experiments and machinelearning, we show that not only do they enter a communitywriting worse posts than NBUs, but the quality of their postsalso worsens more over time. This suggests that communities may play a part in incubating antisocial behavior. In fact,users who are excessively censored early in their lives aremore likely to exhibit antisocial behavior later on. Furthermore, while communities appear initially forgiving (and arerelatively slow to ban these antisocial users), they becomeless tolerant of such users the longer they remain in a community. This results in an increased rate at which their postsare deleted, even after controlling for post quality.Related WorkWe start by considering definitions of antisocial behavior,summarize work on antisocial behavior online, then discusshow such behavior can be detected in a variety of settings.Antisocial behavior. Antisocial behavior, which includestrolling, flaming, and griefing, has been widely discussedin past literature. For instance, a troll has been defined asa person that engages in “negatively marked online behavior” (Hardaker 2010), or a user who initially pretends to bea legitimate participant but later attempts to disrupt the community (Donath 1999). Trolls have also been characterizedas “creatures who take pleasure in upsetting others” (Kirman, Lineham, and Lawson 2012), and indeed, recent workhas found that sadism is strongly associated with trollingtendencies (Buckels, Trapnell, and Paulhus 2014). Finally,some literature instead provides a taxonomy of deviant behavior (Suler and Phillips 1998). In this paper, we rely on acommunity and its moderators to decide who they considerto be disruptive and harmful, and conduct aggregate analysesof users who were permanently banned from a community.Typology of antisocial users. Among FBUs, we observethat the distribution of users’ post deletion rates (i.e., theproportion of a user’s posts that get deleted by moderators)is bimodal. Some FBUs have high post deletion rates, whileothers have relatively low deletion rates. While both typesof FBUs tend to write similarly overall, those with highpost deletion rates write less similarly to other users in thesame discussion thread and write more in each discussionthey participate in, while those with low post deletion ratesspread their posts across a larger number of discussions, andthus attract less attention. Starting from this observation, weintroduce a typology of antisocial behavior based on comparing a user’s post deletion rate across the first and secondhalves of their life, and identify users who are getting worseover time, as well as those who later redeem themselves.Studying antisocial behavior. Research around antisocialbehavior has tended to be largely qualitative, generally involving deep case study analyses of a small number ofmanually-identified trolls. These analyses include the different types of trolling that occur (Hardaker 2010), the motivations behind doing so (Shachaf and Hara 2010), and the different strategies that others use in response to trolls (Baker2001; Chesney et al. 2009). Other work has quantified theextent of such negative behavior online (Juvonen and Gross2008). In contrast, the present work presents a large-scaledata-driven analysis of antisocial behavior in three largeonline communities, with the goal of obtaining quantitative insights and developing tools for the early detection oftrolls. Conceptually related is a prior study of the effectsof community feedback on user behavior (Cheng, DanescuNiculescu-Mizil, and Leskovec 2014), which revealed thatnegative feedback can lead to antisocial behavior. However,rather than focusing on individual posts, this paper takes alonger-term approach and studies antisocial users and theirevolution throughout their community life.Predicting future banning. Last, we show that a user’sposting behavior can be used to make predictions about whowill be banned in the future. Inspired by our empirical analysis, we design features that capture various aspects of antisocial behavior: post content, user activity, community response, and the actions of community moderators. We findthat we can predict with over 80% AUC (area under the ROCcurve) whether a user will be subsequently banned. In fact,we only need to observe 5 to 10 user’s posts before a classifier is able to make a reliable prediction. Further, crossdomain classification performance remains high, suggestingthat the features indicative of antisocial behavior that we discover are not community-specific.Antisocial behavior is an increasingly severe problem thatcurrently requires large amounts of manual labor to tame.Our methods can effectively identify antisocial users earlyin their community lives and alleviate some of this burden.Detecting antisocial behavior. Several papers have focusedon detecting vandalism on Wikipedia by using features suchas user language and reputation, as well as article metadata (Adler et al. 2011; Potthast, Stein, and Gerling 2008).Other work has identified undesirable comments based theirrelevance to the discussed article and the presence of insults (Sood, Churchill, and Antin 2012), and predictedwhether players in an online game would be subsequentlypunished for reported instances of bad behavior (Blackburnand Kwak 2014). Rather than predicting whether a particular edit or comment is malicious, or focusing only on casesof bad behavior, we instead predict whether individual userswill be subsequently banned from a community based ontheir overall activity, and show how our models generalizeacross multiple communities. Nonetheless, the text and postbased features used in this prediction task are partially inspired by those used in prior work.

CommunityCNNIGNBreitbart# Users1,158,947343,926246,422# Users Banned37,627 (3.3%)5,706 (1.7%)5,350 (2.2%)# Threads200,576682,870376,526# Posts26,552,1047,967,4144,376,369# Posts Deleted533,847 (2.0%)184,555 (2.3%)119,265 (2.7%)# Posts Reported1,146,897 (4.3%)88,582 (1.1%)117,779 (2.7%)Table 1: Summary statistics of the three large news discussion communities analyzed. Percentages of totals are in parentheses.Data PreparationDataset description. We investigated three online newscommunities: CNN.com (general news), Breitbart.com (political news), and IGN.com (computer gaming), selectedbased on their large size (Table 1). On these sites, community members post comments on (news) articles, and eachcomment can either be replied to, or voted on. In this paper,we refer to comments and replies as posts, and to the listof posts on the same article as a thread. Disqus, a commenting platform that hosts the discussions in these communities,provided us with a complete timestamped trace of user activity from March 2012 to August 2013, as well as a list ofusers that were banned from posting in these communities.Measuring undesired behavior. On a discussion forum, undesirable behavior may be signaled in several ways: usersmay down-vote, comment on, or report a post, and community moderators may delete the offending post or outrightban a user from ever posting again in the forum. However,down-voting may signal disagreement rather than undesirability. Also, many web sites such as Breitbart have lowdown-voting rates (only 4% of all votes are down-votes);others may simply not allow for down-voting. Further, onewould need to define arbitrary thresholds (e.g., a certainfraction of down-votes) needed to label a user as antisocial. Automatically identifying undesirable posts based onthe content of replies may also be unreliable. In contrast,we find that post deletions are a highly precise indicatorof undesirable behavior, as only community moderators candelete posts. Moderators generally act in accordance with acommunity’s comment policy, which typically covers disrespectfulness, discrimination, insults, profanity, or spam. Postreports are correlated with deletions, as these reported postsare likely to be subsequently deleted.At the user-level, bans are similarly strong indicatorsof antisocial behavior, as only community moderators canban users. Empirically, we find that many of these bannedusers exhibit such behavior. Apart from insu

Stanford University,yCornell University Abstract User contributions in the form of posts, comments, and votes are essential to the success of online communities. However, allowing user participation also invites undesirable behavior such as trolling. In this paper, we characterize antisocial be-havior in three large online discussion communities by ana- lyzing users who were banned from these .

Effective Practices for Online Tutoring For Discussion at .

NVMe over Fabrics Discussion on Transports

Will Minnesotans engage in a discussion . - Citizens League