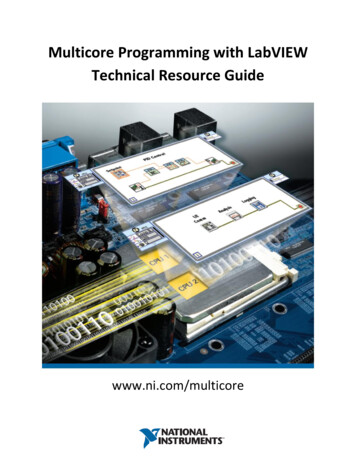 Figure 2. The multicore processors share the cache and MMU with short interconnectsFPGAsFPGAs (Field Programmable Gate Arrays) are a type of silicon composed of logic gates. They areconsidered a massively parallel hardware device and are well-suited for high-performance computingand number crunching, such as digital signal processing (DSP) applications. FPGAs run at a lower clockrate than microprocessors and consumer more power.Figure 3. FPGAA FPGA is programmable chip composed of three basic components. First, the logic blocks are wherebits are crunched and processed to produce programmatic results. Second, the logic blocks areconnected together through programmable interconnects routing signals from one logic block to thenext block. The interconnects on the FPGA serve as a micro switch matrix. Third, the I/O blocks connectto the pins on the chip providing two-way communication to surrounding circuitry.Since FPGAs execute in a parallel fashion, it allows the user to create any number of task-specific coresthat all run like simultaneous parallel circuits inside one FPGA chip. The parallel nature of the logicalgates on the FPGA allow for very high throughput of data, more so than their microprocessorcounterparts.How LabVIEW Programs Parallel HardwareThe dataflow nature of LabVIEW allows parallel code to easily map to parallel hardware. Therefore, it isan ideal development language for targeting multiprocessor, hypertheaded, and multicore processorsystems.In the case of programming FPGAs, LabVIEW generates VHDL code which is automaticallycompiled to a bitstream that can target Xilinx FPGAs.6www.ni.com/multicore

Differences between Multithreading and MultitaskingMultitaskingIn computing, multitasking is a method by which multiple tasks, also known as processes, share commonprocessing resources such as a CPU. With a multitasking OS, such as Windows XP, you cansimultaneously run multiple applications. Multitasking refers to the ability of the OS to quickly switchbetween each computing task to give the impression the different applications are executing multipleactions simultaneously.As CPU clock speeds have increased steadily over time, not only do applications run faster, but OSs canswitch between applications more quickly. This provides better overall performance. Many actions canhappen at once on a computer, and individual applications can run faster.Single CoreIn the case of a computer with a single CPU core, only one task runs at any point in time, meaning thatthe CPU is actively executing instructions for that task. Multitasking solves this problem by schedulingwhich task may run at any given time and when another waiting task gets a turn.CPU CoreFigure 1. Single-core systems enable multitasking OSs.MulticoreWhen running on a multicore system, multitasking OSs can truly execute multiple tasks concurrently.The multiple computing engines work independently on different tasks.7www.ni.com/multicore

For example, on a dual-core system, four applications - such as word processing, e-mail, Web browsing,and antivirus software - can each access a separate processor core at the same time. You can multitaskby checking e-mail and typing a letter simultaneously, thus improving overall performance forapplications.CPU CoreCPU CoreFigure 2. Dual-core systems enable multitasking OSs, such as Windows XP, to truly execute two taskssimultaneously.The OS executes multiple applications more efficiently by splitting the different applications, orprocesses, between the separate CPU cores. The computer can spread the work - each core is managingand switching through half as many applications as before - and deliver better overall throughput andperformance. In effect, the applications are running in parallel.MultithreadingMultithreading extends the idea of multitasking into applications, so you can subdivide specificoperations within a single application into individual threads. Each of the threads can run in parallel. TheOS divides processing time not only among different applications, but also among each thread within anapplication.Engineering and scientific applications are typically on dedicated systems (i.e. little multitasking). In amultithreaded National Instruments LabVIEW program, an example application might be divided intofour threads - a user interface thread, a data acquisition thread, network communication, and a loggingthread. You can prioritize each of these so that they operate independently. Thus, in multithreadedapplications, multiple tasks can progress in parallel with other applications that are running on thesystem.8www.ni.com/multicore

Measurement or aceLoggingComm.CPU CoreCPU CoreFigure 3. Dual-core system enables multithreadingApplications that take advantage of multithreading have numerous benefits, including the following:More efficient CPU useBetter system reliabilityImproved performance on multiprocessor computersIn many applications, you make synchronous calls to resources, such as instruments. These instrumentcalls often take a long time to complete. In a single-threaded application, a synchronous call effectivelyblocks, or prevents, any other task within the application from executing until the operation completes.Multithreading prevents this blocking.While the synchronous call runs on one thread, other parts of the program that do not depend on thiscall run on different threads. Execution of the application progresses instead of stalling until thesynchronous call completes. In this way, a multithreaded application maximizes the efficiency of the CPUbecause it does not idle if any thread of the application is ready to run.Multithreading with LabVIEWNI LabVIEW automatically divides each application into multiple execution threads. The complex tasks ofthread management are transparently built into the LabVIEW execution system.9www.ni.com/multicore

Overcoming Multicore Programming Challenges: ThreadSynchronization and Visual Code DebuggingThis paper outlines several challenges facing multicore programmers and highlights features of theNational Instruments LabVIEW 8.5 graphical programming environment. Specifically, this paperdiscusses designing parallel application architectures, dealing with thread synchronization, anddebugging multicore programs.Designing Parallel CodeThe first major challenge in programming a parallel application is identifying which sections of a givenprogram can actually run in parallel with each other, and then implementing those sections in code. Apiece of code that is able to run in parallel with another piece is a thread; therefore, an entire parallelapplication is multithreaded.Traditionally, text-based programmers have had to explicitly define these threads in their applicationsusing APIs such as OpenMP or POSIX. Because text-based programming is inherently serial in nature,attempting to visualize parallelism in a multithreaded piece of code is difficult. On the other hand, byharnessing the graphical nature of NI LabVIEW, coders can easily visualize and program parallelapplications. In addition, LabVIEW automatically generates threads for parallel sections of code, soengineers and scientists with little or no programming background can spend more time problemsolving and less time worrying about low-level implementation of their applications.Figure 1 - Comparison of Multithreading in LabVIEW and Text-Based Languages11www.ni.com/multicore

Thread SynchronizationA second challenge of multicore programming is thread synchronization. With multiple threads runningin a given application, you must ensure that all these threads work well together. For example, if two ormore threads attempt to access a memory location at the same time, data corruption can occur. Clearly,identifying all possible conflicting pieces of code in an application is a daunting task.By graphically creating a block diagram in LabVIEW, however, you can quickly take a specific task fromidea to implementation without considering thread synchronization. Figure 2 shows an application inwhich both parallel sections of graphical code access a hard disk when writing a file. LabVIEWautomatically handles the thread synchronization.Figure 2 - Simple Application Demonstrating Automatic Thread Synchronization in LabVIEWDebuggingMost programs do not function perfectly the first time they are executed. This is true for single-core aswell as multicore applications. To logically determine where any functional errors occur in a given pieceof code, you must rely on debugging tools in the development environment to produce the correctbehavior.Debugging poses a unique challenge in multicore applications. Not only must you trace execution of twopieces of code at once, you must also determine which piece of code is running on which processor.Additionally, if you program multithreaded applications frequently, you must deal with thread swappingand starvation issues, which need to be identified during the debugging process.12www.ni.com/multicore

LabVIEW contains several features that greatly simplify debugging multicore applications. Specifically,you can use the execution highlighting feature to quickly and easily visualize the parallel execution of aprogram (LabVIEW is inherently based on data flow). For instance, observe the simple application inFigure 3. When execution highlighting is turned on, you can easily visualize parallel sections of codeexecuting.Figure 3 - Graphical Execution Highlighting in the LabVIEW Development EnvironmentIn addition, the LabVIEW Real-Time Module provides both deterministic execution on multicoremachines and extens

Web Programming in Python with Django!

The Art of Computer Programming, Vol. 4A